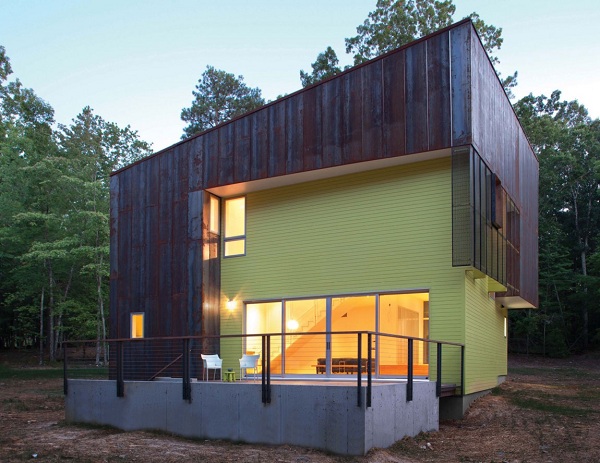 Believe it or not but the Crabill Modern, the environmentally-friendly home whose design earned N.C. State architecture professor Vincent Petrarca the Faculty Design Award from the Association of Collegiate Schools of Architecture, was inspired by an acorn.

The family who commissioned the design was looking for a simple, functional, modern home that would complement their 6-acre wooded property in Hillsborough, NC.  They selected Petrarca’s firm, Tonic Design, to come up with a unique blueprint that would combine creativity with comfort. Petrarca’s partner, Katherine Hogan, came up with the acorn concept – she was taken by the living green and the armored shell of a nut she found when inspecting the building site, and realized that it made the perfect metaphor for the type of environmentally-friendly home she and Petrarca hoped to create.

Crabill Modern’s “shell” is made from solid and perforated COR-TEN® steel, an alloy that does not require painting, but instead weathers to a rich patina that blends harmoniously with the forest landscape. It also provides a visual screen, sheds rain from its single-tilt roof, and contributes to the home’s sustainability by acting as a canopy and sunshade. The wooden structure inside the shell, a simple rectangular box inspired by farm sheds, was made largely from locally-sourced oak. The fact that building materials were readily available, as well as the home’s compact design, kept construction costs down – just $155 per square foot. 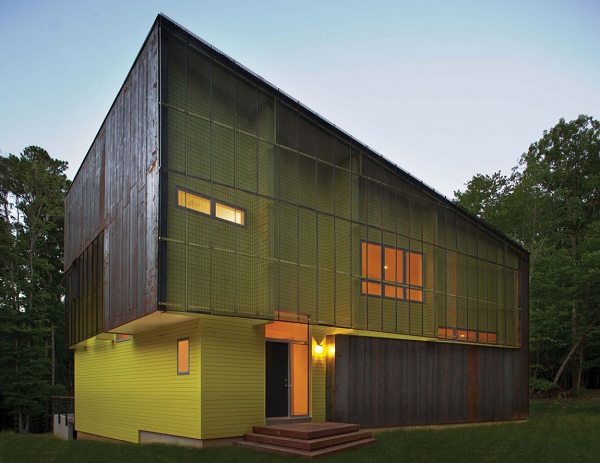 The home, a two-story structure, has two decks which connect the indoors and outdoors. The first floor includes a large kitchen/dining room combo, and an art studio/music space, while the second floor has a master bedroom suite and two bedrooms for the Crabill children. There’s also a loft space for the children’s play area.

The structure is situated so as to make best use of natural light, as well as to frame views of the wooded area surrounding the house – one view, in particular, is that of a triple-trunked tree of which the Crabill family is particularly fond. The home’s impact on the property has been so minimal that the land has even been certified by the National Wildlife Federation as a natural habitat. 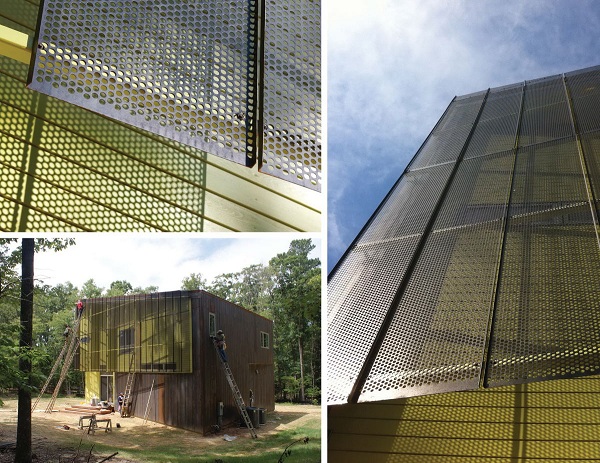 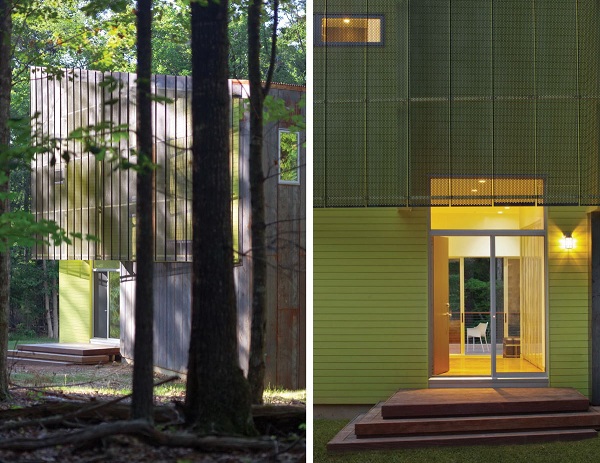 The steel shell’s natural cooling properties and the natural light provided by the home’s large windows are not the only sustainable design elements, however. In order to make the home as energy-efficient as possible, Tonic Design utilized the following elements:

The end result is a home which, while some 800 square feet larger than the 100-year-old cottage the Crabills previously called home, has utility bills which average about 30 percent lower than those of their former residence.

Crabill Modern was completed in 2011, and has since been recognized as a significant architectural achievement. It was featured on the Triangle Modernist Houses 2011 Hillsborough Modernist Tour, and was one of only six homes on the American Institute of Architects’ 2012 Triangle Tour of Residential Architecture. Dwell Homes listed it as a “Region of Honor” pick for March of 2012, and in that same year it also won the AIA’s Merit Award for North Carolina and Triangle Residential Tour Award as well as garnering the ACSA Faculty Design Award for architect Petrarca. 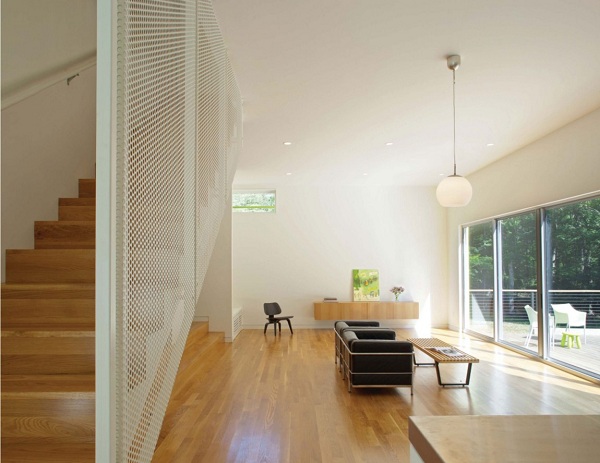 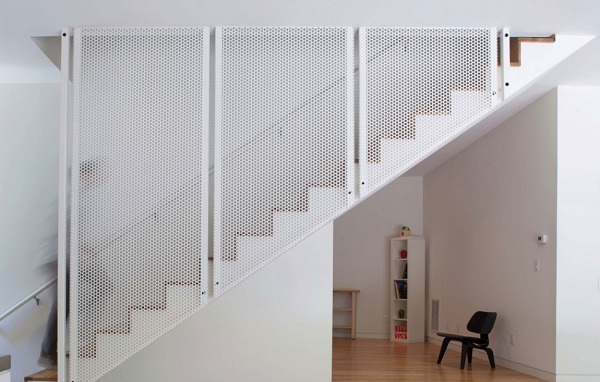 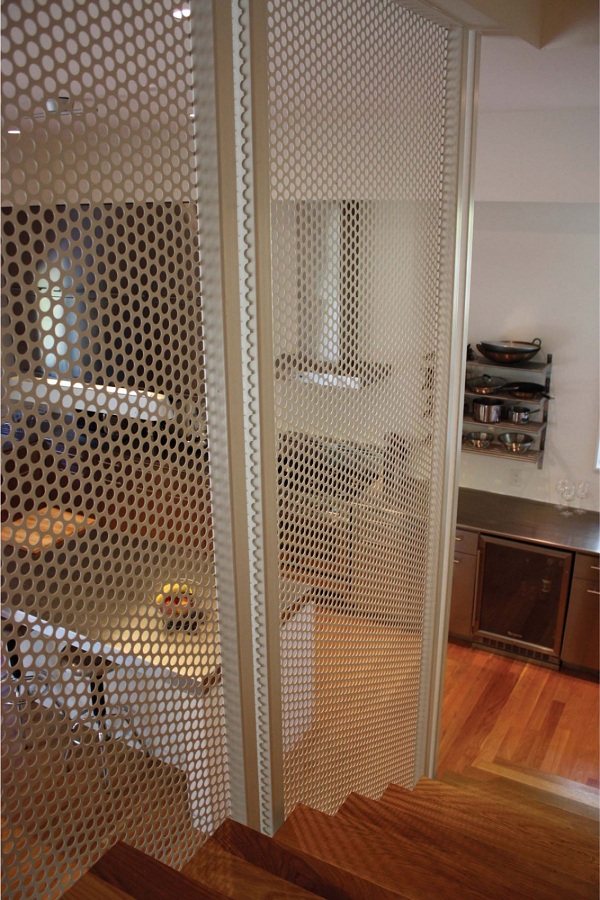 While Crabill Modern may not be a tour-de-force of sustainable architecture, as it does not make extensive use of green technology, its low environmental impact and energy efficiency make it worthy of note. It may have been inspired by an acorn, but eco-friendly homes are far from just another nutty idea. 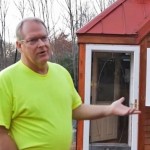