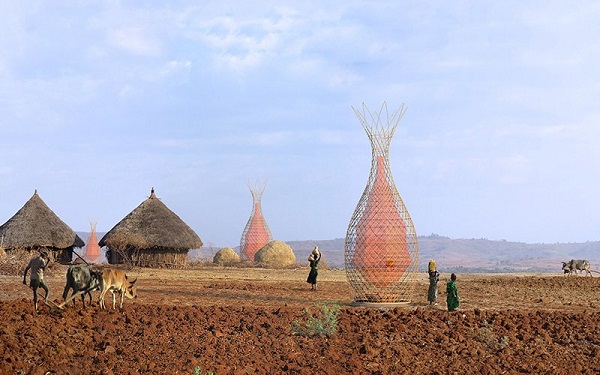 Imagine travelling six hours a day and having to scoop water with a trashed plastic bottle from a worm infested stagnant pond contaminated by human waste. For some people in Ethiopia, this process not only consumes prime hours of the day, it endangers their children by exposing them to dangerous illnesses and taking them away from school, ensuring a never ending cycle of poverty.

Many like Bill Gates and Matt Damon tried to find high tech solutions but critics say most of these projects simply failed because integrating complex technologies (converting toilet water to drinking water) in remote villages that don’t even have access to a local repairman renders many of these ideas impractical.

An Italian designer Arturo Vittori believes the solution to this social calamity lies not in high tech, but in sculptures that look like giant-sized objects one could only come across at world’s famous Burning Man festival.

Enter the Warka Water tower! This mind blowing 30 feet tall water tower can collect over 25 gallons of potable water per day by harvesting water out of thin air (atmospheric water vapor). Just like an immaculately engineered German car, the Warka’s every detail from carefully-placed curves to unique materials, has a functional goal.

As described by the Smithsonian, “The rigid outer housing of each tower is comprised of lightweight and elastic juncus stalks, woven in a pattern that offers stability in the face of strong wind gusts while still allowing air to flow through. A mesh net made of nylon or polypropylene, which calls to mind a large Chinese lantern, hangs inside, collecting droplets of dew that form along the surface. As cold air condenses, the droplets roll down into a container at the bottom of the tower. The water in the container then passes through a tube that functions as a faucet, carrying the water to those waiting on the ground.” 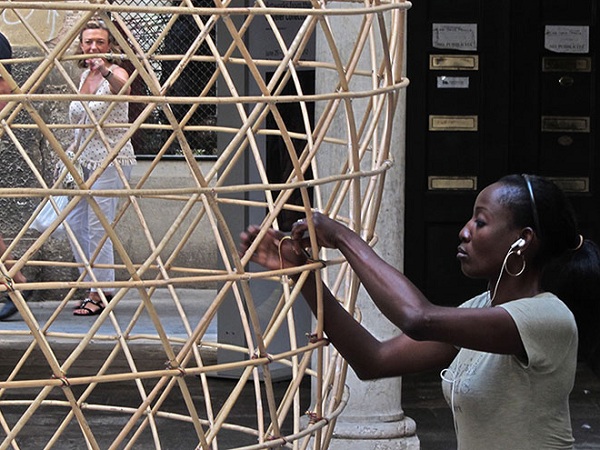 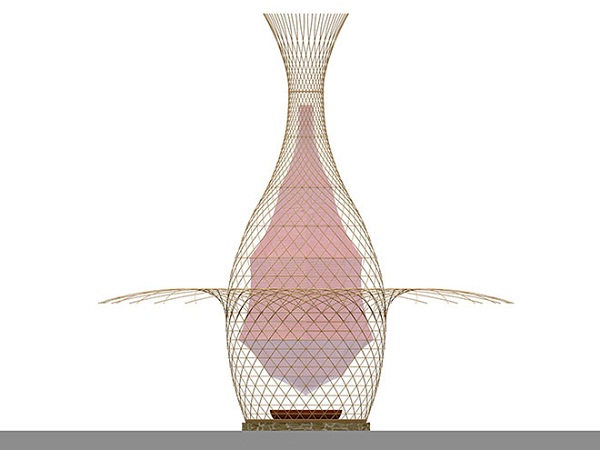 Warka’s designer, Vittori claims this invention is very effective in a sub-Saharn climate. This is because the key factor to collecting condensation is the difference between day and night temperatures.  In the desert these temperatures can differ as much as 50 degrees Fahrenheit.

Vittori’s heart is swell with excitement, “It’s not just illnesses that we’re trying to address. Many Ethiopian children from rural villages spend several hours every day to fetch water, time they could invest for more productive activities and education,” he says. “If we can give people something that lets them be more independent, they can free themselves from this cycle.“

Inventor is confident that each Warka will cost about $550 which is substantially cheaper than any other solution so far. Additional factor that promises wide-spread adaptability is that the structure takes only three days and six people to install, and doesn’t call for any local voodoo doctor to maintain. WarkaWater 2.0 is also in the works, this jazzed up version may include solar panels and LED bulbs to provide light after dark. Fresh water, warm people and LED lights, I’d party there! 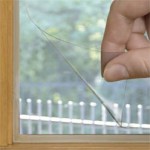 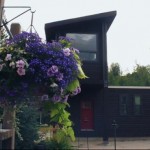 Tiny Houses: Can They Revive the Disenchanted American Dream?
{ 2 comments… add one }