Zeroscaping for Dummies: a Lesson in Climate Compromise

I grew up believing that gardens were green. End of discussion. But when I relocated to the dry climate of Idaho, I found myself faced with the harsh reality that green gardens aren’t always an option. I’d heard of zeroscaping before then- the practice of landscaping using mostly rocks, gravel, and other non-organic elements to Read more

Water. It’s difficult to say we lack it during this el-nino year.  You look outside, nothing but rain.  You open your faucet, it doesn’t run out.  It seems like it’s always there in unlimited quantities.  Hence lies a dangerous illusion that water has always been there and always will.  However, there’s been a lot of Read more 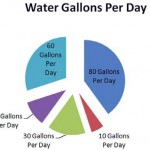 It’s been official for months now – California again is facing water crisis. Unusually dry and hot weather had eroded our priceless Sierra snowpack, the supply of much of our water.  Our local reservoirs have been low for years now. In addition, water demand in beautiful state is growing each year and our sources of Read more