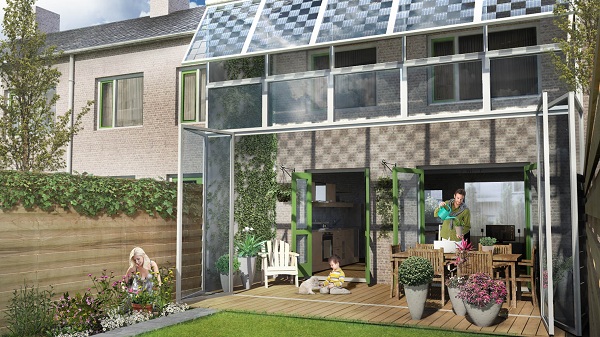 The innovative Dutch have once again prevailed with an impressive green technology that they’ve unveiled to the world. In the Netherlands’s constant effort to encourage cultural energy-neutrality, a team of student scientists from Delft University of Technology have developed a solar “skin,” a housing cover that will make homes more sustainable and energy-neutral.

The project was born of a need to reinvent a typical row-home in the Netherlands. The country is filled with these townhouse neighborhoods that were quickly constructed after World War II in order to avert a housing shortage, but these neighborhoods have proved to be terribly inefficient when it comes to utilizing energy and resources. Wanting to preserve the history behind the homes while keeping their internal structure, researchers sought to find a way to make these homes more self-sustaining.  Their solution was plain genius.

The inspiration behind the project comes from the family home of Dennis, a student and scientist from the Delft University of Technology, a home in Honselersdijk that has sheltered his family for three generations. Dennis explains that when his grandparents moved into the house, it was new and was a perfect place for a young family at the time. A unique characteristic of the area was that the neighborhood had many greenhouses, even from the time that his father was a small boy. Remembering his youth, Dennis says, “…it mainly results in the feeling of a warm home.”

These days, Dennis’s home is considered a wasteful and outdated post-war structure. Furthermore, 60% of the housing in the Netherlands is comprised of these row-houses. Dennis’s home is not alone. When confronted with the question, “Shouldn’t we just demolish these houses?” Dennis and his team believe that getting rid of these houses isn’t the right solution. Despite problems in their design and construction, they have been providing a warm home like Dennis’s to around 1.4 million Dutch. “We believe it’s about finding a balance between what should be improved and what should be preserved,” the team says. So, the question became how to preserve the home while improving the home.

The scientists considered the option of roof solar panels, an easy way to get green energy into pre-existing homes, but this is already old technology. The future lies in the integration of photovoltaic cells into building materials. Concurrently, the incorporation of photovoltaic cells into traditional building materials has already made its way into public construction.

At Oxford Voltaics, glass window panes are being coated with a photovoltaic substance so that the windows themselves generate the energy used in whatever facility they reside. So, the team developed a so-called skin of photovoltaic cells (solar skin) that surrounds a row of homes on a street in Honselersdijk. In the summer, the skin will remain open, with the solar cells generating power for the houses as well as shading them from the heat, and in the winter, the skin will be closed, retaining heat for the house by trapping energy from the sun so that the home stays warm despite the chilly weather.

In a press statement, the team explained, “ The insulated skin will provide a climactic buffer zone to the outside, generate its own power, and reclaim the somewhat lost relationship to the public street, thus tackling issues regarding ecological and, in particular, social sustainability.”

The team called their project Prêt-à-Loger, meaning “ready to be lived in,” and will show it off in Versailles on June 28th as part of the U.S. Department of Energy’s Solar Decathlon: Europe 2014, a contest started in 2002 as a means to demonstrate the practicality of solar energy to the housing industry.

The team chose the name Prêt-à-Loger to demonstrate that people can still live in the home while changes are being made to improve sustainability. If we look at Dennis and the inspiration behind project Prêt-à-Loger, then we can say it is essential to preserve a home’s identity: the living space and the people who live there. The Dutch team’s project goes far beyond flaunting a new technology; it embodies the idea that it is possible to renovate our living spaces without renovating our identity.