Kids and Consumerism – What’s Your Strategy? 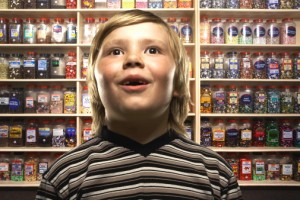 Although we may be disciplined shoppers, able to go into any store and spend only a few minutes there, picking out what we need, purchasing it, and then leaving, the same is not always true with our children, is it?  In fact it probably never happens.

Children, much more than adults, are impacted by the commercials with which they are bombarded during every cartoon show or “kid-safe” show that they watch.  The advertisers are super skillful these days at getting deep into the psyche of our children and plant the seeds that eventually sprout into a compulsive, insatiable consumer.

Understandably, kids also have a lot less discipline than adults. They see something, they want it now and it’s as simple as that.  They can go on whining about it till they get what they want.  And then of course there are parents, who compensate the lack of attention to their kids by buying them every possible toy on the planet.  “What’s that little Suzy, your Barbie version 2.1 is outdated?  Oh the new Barbie has a new hair cut style?  No problem here’s the latest Barbie, version 2.2.  Hope you’re happy for another 3 days.”  Meanwhile the old Barbie that we purchased last week is on its way to spend an eternity in the new castle – our nearest landfill.

Problem is, most things bought to out kids are typically used for a day, then left on the floor gathering dust until mom (or dad) picks them up and shoves them in the closet. It’s a never ending cycle, is it?  Psychologist say some type of reward system is important and I agree, it’s just we don’t need to treat kids like dogs and give them a snack every time they do what we ask.  I notice that when we establish this type of relationship nothing is ever done “just because”, there always have to be something in return, effectively turning our kids into great merchants.

Thanks goodness the school teachers are urging kids to consider the environment, and expose them to sustainable living mindset early these days.  We as parents must do our job even better than school teachers though.  This is our chance to turn our kids into either the garbage producing monster or a mindful, contributor to the society.

We simply can teach our kids from a young age and empower them with knowledge to make the right choices early on.  If we always pick up after our kid from ages of five to ten, and then suddenly expect them to pick up after themselves when they turn ten it will be an uphill battle.  It’s just very unlikely to happen. “That’s what mom’s for,” is their motto, isn’t it? 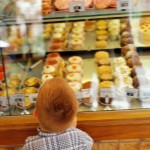 Also saying “no” to kids who ask for toys when we’re strolling through a store can be difficult for some parents, but it needs to be done.  The pattern in our kids’ mind has to be this: “I can ask what I want but most of the time I won’t get it.  And when I do get it, then it will be a nice surprise.”  This is what mom used to do and it worked fine.  Little Tadas survived to be a happy, vibrant guy who can’t stand being wasteful.  Another little technique my mom used that I think was very wise is this:  If I asked for some monster truck, she’d get me a small toy car, if I asked for some crazy looking robot, she’d get me a balloon, if I asked for a chocolate cake she’d get me a piece of candy.  She always got me something instead of nothing and that was a perfect compromise in my mind.

If you ever feel like you’re powerless they way your kid sees the world then don’t be.  You are actually making a bigger impact than you think.  Everyone knows, kids are like sponges and absorb everything we tell them.  They may not show it right away but they secretly get it.  Most, even become tremendous influence to other kids.

I remember when I was growing up in Lithuania, my friends and I had naturally very little opinion the way the world was and most of our knowledge came from kids that were just a couple of years older.  In our minds those older kids were “experienced” and were able to impart true wisdom. J  Sounds silly now but back then it was real stuff.  In our world, older kids knew things “better” than our own parents. If the older kid would put the pencil lead into the boringly white chewing gum and made it colorful then repeating the same was the latest fad.  Nothing like the silver colored chewing gum between our teeth to impress the girls!

Just remember that some day your kid will be that older brother or sister to someone and instead of stuffing chewing gum with lead they can teach a younger kid to pick up a piece of plastic or take an injured bird to a local sanctuary.  I really see that whatever we impart on kids with strong conviction and live examples it reverberates through their friends and makes a much bigger impact than we think.

Kids need their parents to be parents, not friends. And one way to be a parent is to ensure that we teach your kids how to be stewards of their environment.  I personally do not have a kid yet but I’m really looking forward to it.  I am really hoping my little greenie will start getting the big picture early.  Maybe I’m nuts but when my kid is old enough, I plan to take him or her to India and show how most of the kids in the world really live – scraping the foreigner’s spat-out chewing gum off the asphalt and spending many freezing nights under the cover of nothing but stars.  I am hoping will put a plug on that consumerism mindset once and for all.  Time will show.