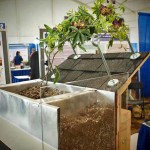 The modest Sunnyvale, CA ranch house dated back to 1957 and was causing the owners – Jerry and Charlotte and their two young children not a little discomfort with constant drafts, condensation and problems with mold. Some of the rooms were also outdated and inflexible in terms of layout. It was time for change. Actually, Read more

Wood has always been one of our most precious resources. Unfortunately, with over 7 billion of us relying on trees for survival and comfort, managing forests in a renewable fashion can be challenging! Where and how our hardwood is sourced makes an enormous impact on all of us – economically, politically, and environmentally. In this Read more