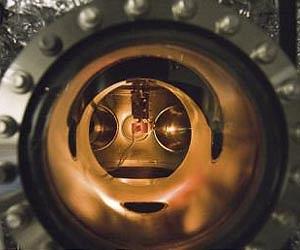 A small PETE device made with cesium-coated gallium nitride glows while being tested inside an ultra-high vacuum chamber. The tests proved that the process simultaneously converted light and heat energy into electrical current. Credit: Photo courtesy of Nick Melosh, Stanford University.

Solar energy, more commonly defined by the energy geeks as “radiant light and heat from the sun”, continues to be harnessed for energy production. As you may be aware, most accountable renewable energy invokes the following:

The problem is, only a fraction of the radiation gathered from the sun is really used.

Scientists have always used both light and heat from the sun to produce energy, however, they hadn’t yet discovered a way to efficiently utilize both simultaneously – Until now!  A device out of Stanford University is promising not just one production of the solar energy but two by being able to harness the power of both light and heat.

A Photon Enhanced Thermionic Emission device, or PETE device, is not only a state of the art technology but could potentially reduce the costs for the production of solar power to the point of where it could be a real competitor against oil as a source of energy. This is great for two reasons: 1) the environmental aspect of having solar power being a big player in the energy game is huge considering that it’s a renewable and clean energy source and 2) therein lies a real competitor to the oil industry. This is not to mention it also could open the door to ending dependency on oil both home and abroad.

What a PETE device ultimately does is simultaneously combines light and heat from solar radiation, which helps to produce electricity from solar technology. Engineers at Stanford have come up with a way to use light and heat of the sun to create electricity so that it can produce more efficient and cheaper forms of solar power methods. What this means is that unlike most solar panels, which have decreased efficiency as the temperature rises, the PETE technology process creates panels that work the other way and actually increase efficiency as the temperature rises. In technical terms, photon enhanced thermionic emission is a process that harvest wasted heat and solar energy and brings together thermal and solar cell conversion at high temperature levels for the best and cleanest results.

Real world practical solutions like PETE provide for greater sustainability and are a minuscule step towards ultimately lowering earth’s carbon footprint. With major players like Green Peace and The Clinton Global Initiative investing thousands of dollars into renewable energy projects, similar to PETE, there’s certainly a greater sense of appeasement for green activists. More importantly, the projects assigned by Doug Band, The CGI, Green Peace, and many others are improving the way we live as human beings. PETE devices potentially create a more efficient and cost effective solar energy source by creating a technology that helps reduce the risk of building large solar farms that could produce enough energy to even compete with fossil fuel energy. Basically it cut costs and gives solar power the change to compete.  By doing this, engineers at Stanford have created a new technology that could have the ability to change the way solar power is harvested and a technology that could shine a new light on an old renewable energy.

Author:  “Jack Lundee – Follower of all things green and progressive.”

Concrete: How “Green” is it and What are the Alternatives?