Meat the Biggest Polluter in the World! 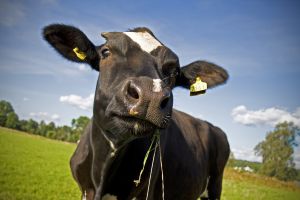 Want to know the world’s top destroyer of the environment? It is not the car, or the plane, or some coal plant: it is the cow.

A United Nations report has identified the world’s rapidly growing herds of cattle as the greatest threat to the climate, forests and wildlife. And they are blamed for a host of other environmental crimes, from acid rain to the introduction of alien species, from producing deserts to creating dead zones in the oceans, from poisoning rivers and drinking water to destroying coral reefs.

The 400-page report by the Food and Agricultural Organization, entitled Livestock’s Long Shadow, also surveys the damage done by sheep, chickens, pigs and goats. But in almost every case, the world’s 1.5 billion cattle are most to blame. Livestock are responsible for 18 per cent of the greenhouse gases that cause global warming, more than cars, planes and all other forms of transport put together.

Burning fuel to produce fertilizer to grow feed, to produce meat and to transport it – and clearing vegetation for grazing produces 9 percent of all emissions of carbon dioxide, the most common greenhouse gas. And their wind and manure emit more than one third of emissions of another, methane, which warms the world 20 times faster than carbon dioxide.

Livestock also produces more than 100 other polluting gases, including more than two-thirds of the world’s emissions of ammonia, one of the main causes of acid rain.

Ranching, the report adds, is “the major driver of deforestation” worldwide, and overgrazing is turning a fifth of all pastures and ranges into desert.

people do.  This waste is untreated and unsanitary.  It is filled with chemicals and antibiotics (the main cause of antibiotic resistance in people) and it is poisoning our rivers, killing fish and getting into the human drinking water.  This pollution further washes down to the sea, killing coral reefs and creating “dead zones” devoid of life. One is up to 21,000 sq km, in the Gulf of Mexico, where much of the waste from US beef production is carried down the Mississippi.

The report concludes that, unless drastic changes are made, the massive damage done by livestock will more than double by 2050, as demand for meat increases.

I’ve been turning off faucet water while brushing to conserve California water but looks like there’s a better way to do it!

Can Green Homes Gain Momentum in the Real Estate Market?